Bursts and spurts and lights

The frame for the acrylic has been welded; although I am still not sure how will I attach the panels to the frame.Before I make the final decisions on that front, it is time to look at the LED’s…
I have purchased 50 meters of individually programmable LED's (they come in 5 meter lengths) and couple of Arduino computers. 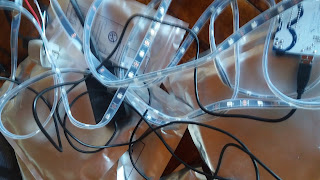 Until a few months ago (before I met with All Saint's College students) Arduino's were not part of my world. Now we have been formally introduced, but not really acquainted.
This is the part of the project that I am totally relaying on help from my friends: Silas (ASC student) and my Arduino whizz, his dad Chris who knows how to power the whole set up (just look at the board at the forefront of the photo), and my son Robert, a software engineer 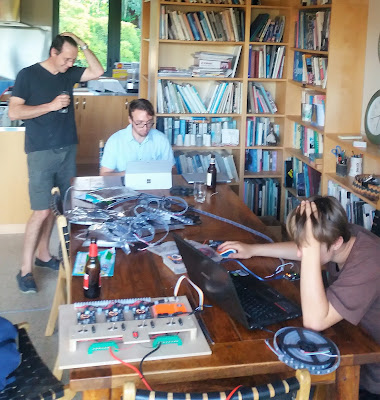 While they are working on the programming and powering, I'm figuring out how to physically wrap 50 m of LED's around the sculpture with the least amount of cutting and soldering. We have worked it out nicely at ASC, but with 10 x 5 m of LED's, not 1 x 50 m.
But I have the starting point: 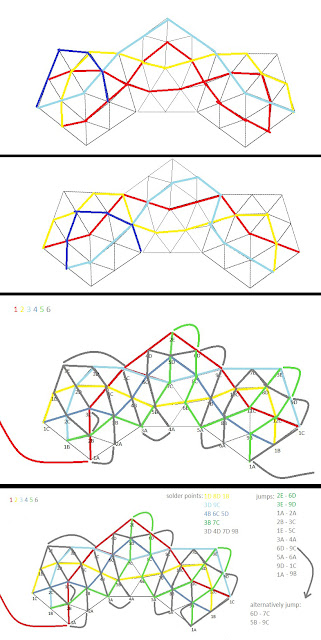 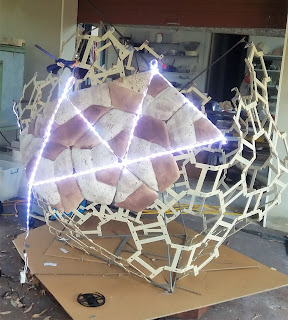 Ups, lights will be interfering with acrylic. Back to the drawing board:

Second mock up (now we have movement, not all LED's lit at once): 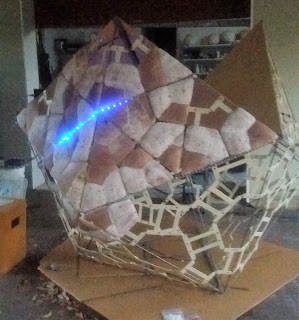 A month later and there is not much progress.

Oh, I have spent hours and days working on “it”, avoiding “it”, looking at “it”, making models of “it”….but to tell the truth, I feel that I am waay out of my comfort zone. Maybe writing about “it” will help….
There are couple of big – and quite obvious - changes here in comparison to the previous sculptures: the addition of acrylic panels and LED lights. Unfortunately, the way that I have designed and made the metal frame is very suitable for my ceramics, but not necessarily for acrylics and LED’s. The problem is that I haven’t fully considered attachments of those elements at the planning stage, so now I have to, kind of, retro-fit them.

Those hexagonal gaps in the frame .... 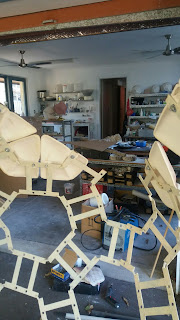 .... get filled with ceramic elements: 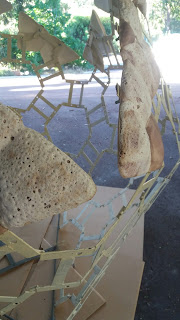 But those are also spaces where I'm planing to have LED lights, and at the moment, nothing to attach them to.
And there is nothing to support the acrylic on top: 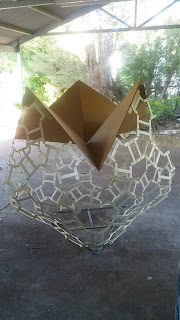 On this photo I have a  cardboard template that is light and only needs couple of bull clips to hold it,but it is not necessarily accurate, so I have decided to make a new one out of 6mm MDF ( much cheaper to play with than the acrylic, and it will be handy when ordering a real thing). It is also much heavier than cardboard.
The first problem is: How to find the right height point in the middle of the frame to create a support for the acrylic without distorting the frame, keeping in mind that the actual frame is not necessarily as symmetrical and accurate as the drawing. 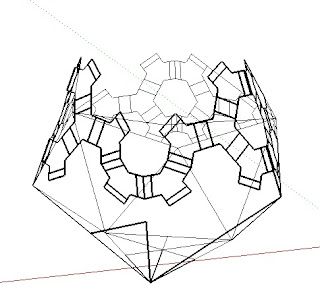 After a lot of trial and errors, I have found the perfect tool to help me - a tripod. Why didn't I think of it hours ago? 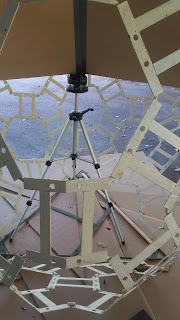